Some of the most useful utilities for translators working between Japanese and English have come from Ryan Ginstrom, a translator and colleague. He's come up with the latest offering, which is useful, and also free: CountAnything. As its name indicates, it counts most of the file formats I generally translate, including words in text boxes and many other embedded objects. It counts the numbers of words, characters (with and without spaces), Asian characters, and non-Asian words. You can save the reports as html files or print them out. I personally would have prepared a tab-delimited file, as you can export it directly into Excel. The latest version 1.2.1 gives you word/character counts of the following document formats:

Here's what the screen looks like after a count: 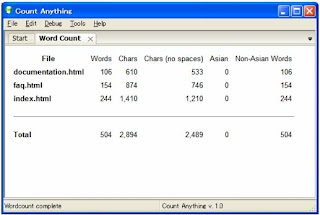 I tried out the PDF feature on a document containing mixed Japanese and English, and CountAnything did very well.

Hello. I found this blog on the Wordfast mailing list and have been reading the posts.
I usually use JCount (http://bgworks.info/jcount/) which is freeware and can count anything.
I think it is worth a try.
Yuko

Whenever I write articles for my blog, I check the word count and character count at http://word-counter.com. Its free and fast as well.

I am writing code for word counting (Japanese & English mix) in Python.

Please, reply me as soon as possible.

I am writing code for word counting (Japanese & English mix) in Python.

Please, reply me as soon as possible.

Hello I am so delighted I located your I really located you by mistake, while I was watching on google for something else, Anyways I am here now and could just like to say thank for a tremendous post and a all round entertaining website. Please do keep up the great work.
letter count 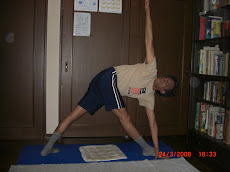